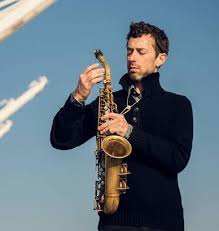 The quartet of Aram Shelton, Jason Adasiewicz, Jason Roebke and Tim Daisy. Arrive features Shelton on alto saxophone, Adasiewicz on vibraphone, Roebke on bass and Daisy on drums. All four are active players in the modern international creative music world, with Tim Daisy being a frequent collaborator of Ken Vandermark, Jason Roebke being tightly involved with Fred Lonberg-Holm, and Jason Adasiewicz being an integral member of Rob Mazurek’s Exploding Star Orchestra.

The music for the debut self-titled album was written by Shelton in the Winter of 2001 and is strongly influenced by the music of John Tchichai, Steve Lacy and Ornette Coleman. It was recorded by Devin Davis at Acme Recording in Chicago in 2001 and released in 2005 by 482 Music as part of their Document Chicago series.