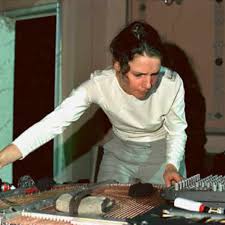 
Born 1968 in Freiburg, grew up in Hamburg. Since 1996 primarily active as improviser and composer in the areas of experimental and new music. In the process of exploring the piano for new sound possibilities, she has reduced the instrument to strings, resonance board and metal frame. With the help of electronics to manipulate and amplify the sounds (sometimes to make parts of the sound audible which are inaudible without amplification), she has developed numerous new playing techniques, sounds, and ways of preparing the dismantled instrument. Because the original inside piano is very heavy, a piano builder (Bernd Bittmann, Berlin) constructed a new and lighter one for her. She has worked intensively in the crossover area between composition and improvisation, and in the field between electronic and handmade sounds, with Berlin musicians such as Annette Krebs, Ignaz Schick, Axel D, Robin Hayward and Burkhard Beins

‘The mechanism of the saxophone permits a concrete-acoustic approach to the instrument. The possiblilities of acting directly on the pads and the flexibility of the reed offer subtle means of altering the sonic wave generated by breath. Once one adopts a way of thinking based on the sort of filtering any electronic musician does, one&rsquo;s attention is drawn to the tiny micro-events that are barely audible in a traditional approach. The sonic planes twist and acoustic distortion emerges, revealing the subtle grains and textures lying &ldquo;inside&rdquo; the acoustic sound. New materials arise as though they had always been right there, hidden behind the immediately perceptible. In order to gain control of them, one reduces any idea of willful intervention to an absolute minimum, leaving only the flow of air through the metal cone, an action that is discrete in certain parameters.

My playing is not about arriving at something; instead, it is an instant that answers to that logic. My musical reflection focuses on questions of praxis. I am not driven by musical intention in the strict sense of the term, but the experience of sound I propose represents a means of; the listener, a way of questioning, of shaking up his feeling of psycological security and transforming his relationship to listening.

Jack Wright has over sixty partners around the US and in Europe with whom he plays on his travels and records. His most recent tours have been with Fabrizio Spera and Alberto Braida in Italy; with Agnes Palier and Olivier Toutlemond in France, Switzerland and Germany, with Michael Johnsen and Sebastien Cirotteau in Europe; with French soprano sax player Michel Doneda and percussionist Tatsuya Nakatani in Japan, France and the US; Carol Genetti, sound vocalist of Chicago, and Jon Mueller, percussionist of Milwaukee; cellist Bob Marsh of the Bay area; Nate Wooley, trumpet, of NYC in Europe; Michael Griener percussion and Sabine Vogel flute of Berlin; Reuben Radding, NYC bassist; and Phil Durrant, English laptop musician.

Their debut recording, another, is a rich, gnarly work, drone-oriented in terms of its consistent thickness and drive but undermined periodically over its 16 minute length by natural-sounding fissures and junctures that force the music to slant down unexpected passages. The density of the first half gives way to a well-considered sparse section where one is impressed to hear the quintet reining itself in so capably. When a drone is re-established, it’s occupying a very different though no less complicated zone, an area with acidic overtones. A tight, excellent first offering from this ensemble, hopefully the first of many.&quot;</em> – Brian Olewnick