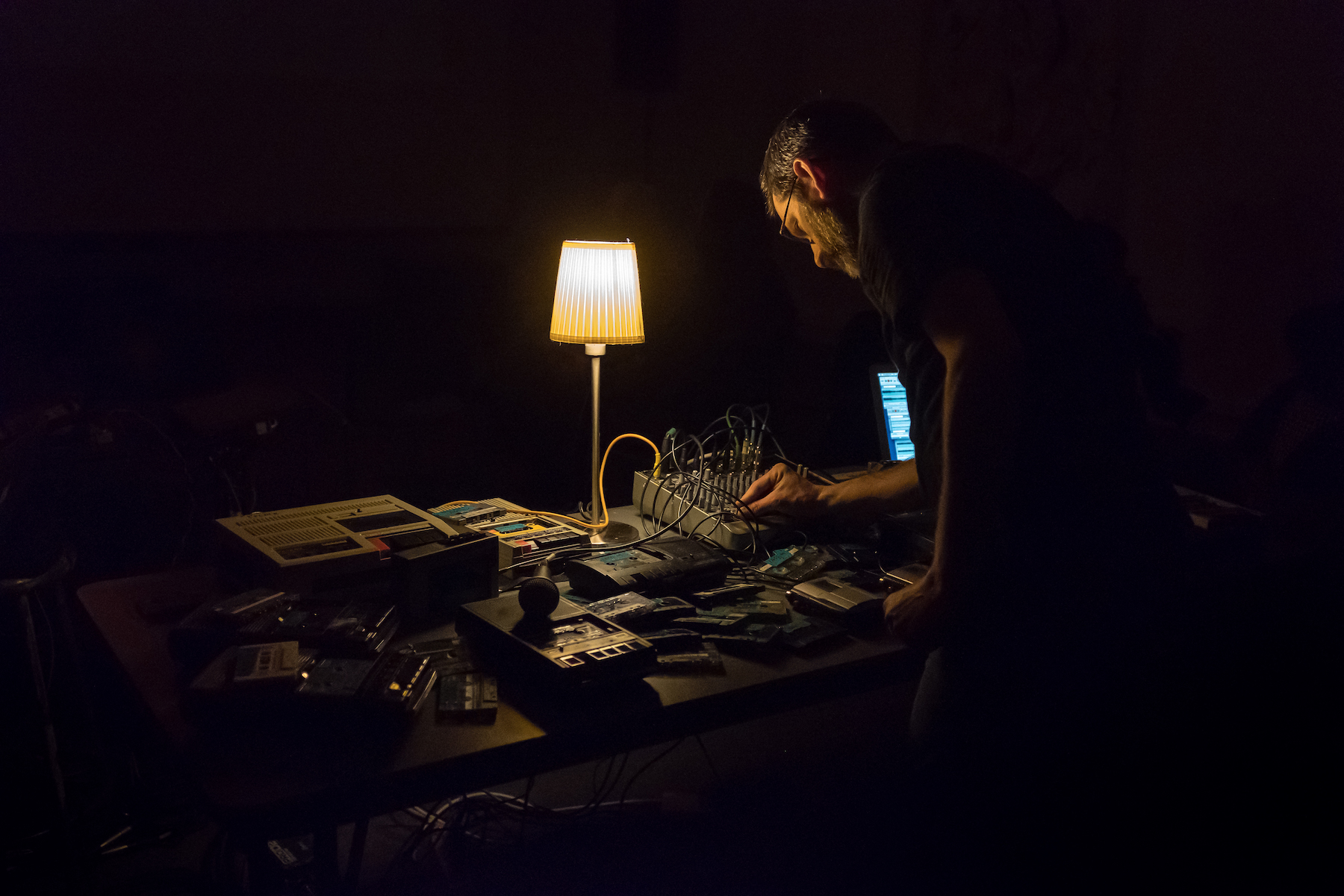 Boston based composer/performer Howard Stelzer performs “Crossing Parallel”, a live score to Joe Taylor’s poetic film footage of the American southwest. Accompanying this work will be a screening of Philadelphia based film maker David Scott Kessler‘s Icelandic short film Lopapeysa (with a recorded score by Mary Lattimore and Benjamin Warfield).

ABOUT CROSSING PARALLEL
“Crossing Parallel”, an extended film by Howard Stelzer & Joe Taylor. It grew out of Taylor’s forthcoming film “The Crossing”, a narrative Western movie shot mostly in Death Valley, Nevada, for which Stelzer composed the soundtrack. This extended film project is intended as a continuation of, or a reimagining of, their collaboration. As the title suggests, it exists in parallel to “The Crossing”, as another view of the work from a non-narrative and sound-focused perspective. For this extended film, Taylor presents deep and evocative Nevada landscapes, sunrises, and natural imagery shot either for use in “The Crossing” or as supplemental footage.  Stelzer uses the cassette tapes he made as source material for the soundtrack in a live tape-collage that spotlights the mood, pacing, and atmosphere of the imagery. The result is a 40-minute work for projected film and live sound performed with between 10 and 20 cassette decks.  Stelzer notes, “As a lifelong city dweller, I was drawn to the landscape images of Taylor’s short films… images of the American southwest, Death Valley, ghost towns in Nevada, rural treelines, mountains, sunsets… they were so different from anything I’ve known. While writing the soundtrack for “The Crossing”, I wanted to see more of Taylor’s images without any actors or plot guiding them. “Crossing Parallel”, then, was conceived as an outgrowth of the feature film… only natural images, and sound distilled mainly from soundtrack elements. The idea is something like armchair tourism; an immersion in glorious American landscapes, desolate and lush.

Howard Stelzer is a composer of electro-acoustic music. Almost all of his sounds are generated by, processed by, recorded onto and played back out of cassette tapes and consumer-grade tape players.  Stelzer operated the Intransitive Recordings label from 1997 until 2012. When he is not composing, Stelzer is a middle school math teacher in Lowell, MA, where he lives with his family in a big room behind a disused power plant.

ABOUT LOPAPEYSA
Lopapeysa, a short film by David Scott Kessler merges travel log with surreal fantasy. Primarily shot during a one month artist residency in Iceland in the winter of 2013, the film explores the mindset of a traveler guided by a longing to fully experience an unknown place – led by his own preconceived ideas and the landscape’s ubiquitous influence. The film seeks to preserve the wonder of first exploration, a naive beauty difficult to recapture and often lost to familiarity.  Lopapeysa and its companion piece Lopi were made for the 2014 exhibition Due North curated by Marianne Bernstein.  The film has an original score by Mary Lattimore and Benjamin Warfield.

ABOUT MADAM DATA
Performing as Madam Data, Ada Adhiyatma explores machine interfaces and the potential for technology to birth mutable bodies that defy the strictures of liberal humanism. They fantasize that machine-mediated sound can offer ways of re-imagining the still-gendered, still-racialized, still differently-abled body in terms that are freeing, fundamentally strange, and ultimately healing. They also think about buildings a lot.