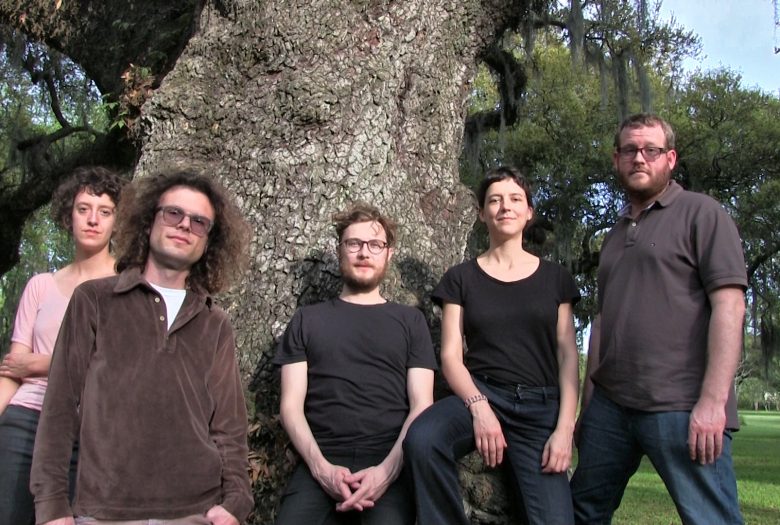 Often pursued, rarely achieved, the attempt to conquer the dynamic possibilities in a large ensemble is the holy grail of experimental music. Somewhere after the fourth or fifth person is added, the same individuality that makes a duo or trio so intriguing starts to become a liability. One way to address this calamity is through the use of “re-arrangeable constructions” as New York City’s Ensemble Pamplemousse does. But what other possibilities exist? Philadelphia’s Ensemble Nomos offers an alternative hidden in deep history of collaboration.

Like Buckmaster Fuller, reversible sweaters, or Mr. Potato Head, Ensemble Pamplemousse’s Blocks Tour is a rearrangeable construction of elements. Prefab modules by the six composers are reconfigured each night of the tour into new structures of sonic architecture. As each block maintains its own internal logic, the listener is pulled forward through the linear unfolding of time. Intertwining patterns of material emerge and dissolve, connect, obstruct, and confer with each other, unveiling new angles of hearing each sonic unit.

Founded in 2002 as a vehicle for musical exploration, Pamplemousse presents concerts of extraordinary focus and clarity. Comprised of virtuosic musicians trained in classical, electronic, and improvisational realms, the group consistently delivers fresh, exhilarating new concepts in sound. The members’ eagerness for aural discovery has allowed for ample experimentation processes, where boundaries are non-existent, and from which a strong dialogue has emerged. Among the group’s vernacular resides formerly unfathomable sound landscapes formed by the acute relationships the performers have forged with each other, and with the composers who are an intrinsic part of the ensemble. The product, uncompromising and resolutely beautiful, is created by incredibly innovative, yet-to-be-named approaches to performance and composition.

Conceived in the shadowed memory of hundreds of concerts, Ensemble Nomos is an evolving collaboration between eight of Philadelphia’s most curious and experienced free improvisers. The ensemble’s instrumentation – violin, cello, bass, trumpet, trombone, guitar, piano, percussion – is entirely acoustic, and leans strangely on the tails of European classical traditions. Though it’s membership is capable of a broad range of musical styles, Nomos is about creating a single, new sound concept, rather than an assemblage of musical references, in an effort to better understand the sonic world in which we live.